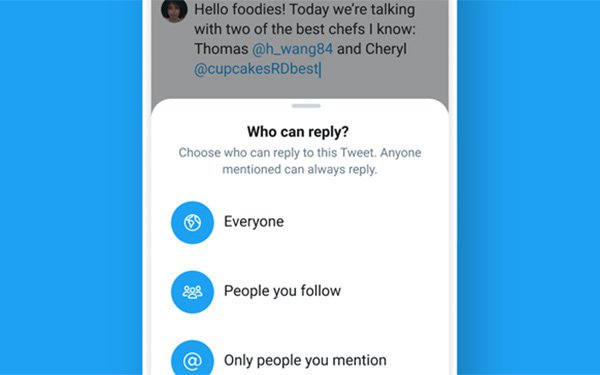 Twitter is giving select users the ability to control who can reply to their tweets.

Dorsey said the feature might enable new use cases, such as panel discussions and other more controlled events on the platform.

“We’ll be watching for the negative impacts, too,” he added.

As it stands, Twitter knows that unwanted replies often make it difficult for users to have meaningful conversations on the platform. Among other efforts to combat the problem, Twitter gave users the power to hide replies on their posts last year.

Tweets with the latter two settings will be labeled, and the reply icon will be grayed out so it’s clear to people if they can’t reply.

People who can’t reply will still be able to view, retweet, retweet with comment, and like these Tweets.

As with most new Twitter tools, response from users appears to be mixed.

Some Twitter loyalists expressed concern the new feature would only reinforce the tendency of people to burrow themselves down into ideological echo chambers.

Despite the inevitable criticism, Twitter’s willingness to test new tools rivals any startup.

Last month, for example, the company finally began testing a feature that will make tweets disappear after 24 hours.

In February, Twitter debuted a “Continue Thread” button, which lets users attach additional thoughts to their existing tweets. The change was intended to make it easier for users and their followers to put new comments into the proper context.